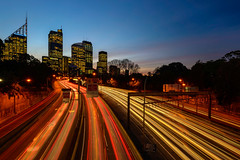 If you know me at all, you know that I’m a “fast” person. When I’m walking down a city sidewalk of a major street, there’s a 99% chance that I will have to walk around at least one person. More than that, if I can, sometimes I’ll jog to where I have to go — instead of walking quickly — because it’s a more efficient use of time. I prefer to pack as much into my time as I possibly can (in most cases).

At this point, I should probably clarify: as much as I possibly can, I try not to have any “obligations” when it comes to doing things with my son. Trying to explain the concept of time to someone who’s only been alive for less than 30 months and who can barely even say his own name seems like a bridge too far. Don’t get me wrong, I still do try to explain concepts that might seem a little out there (for instance: this past winter, we learned about friction, but there was a very tangible reason — ice — anyways, I digress), but when it comes to time, I’ve found that it’s best for me (and for him) if I don’t have any “fixed schedule” to keep. In this way, he’s able to play for as long as he wants (within reason) and there isn’t some sort of power struggle when I think it’s time we stop playing. Don’t get me wrong, I understand that this is a luxury I am afforded. For some parents, the idea of not having a fixed schedule is an impossibility.

Anyways, let’s get back to the parents in the park.

So, there was a parent who was interacting with their kid who was interacting with my kid. It appeared as though the other kid (let’s just call him John) wanted my son to fill up the dump truck with sand. Maybe it’s important to note at this point that this is simply a perception that outsiders may have projected onto the situation. We can’t actually know that that’s what John wanted (as John didn’t say anything). Instead, John’s mom interpreted this as John’s desire and then proceeded to ask my son a question related to filling the dump truck. The problem, however, was that she then asked him another question… and then another question.

Maybe it’s just a quirk I’ve noticed about my son (I’m all for the interpretation that everyone’s different!), but I’ve learned that if I ask my son a question and I wait for an answer, way more times than not, he will eventually answer. My interpretation here is that he has to reflect/think/cogitate before he can answer, both because he’s not sure what the answer is and then because he needs to figure out how to verbalize that answer.

In thinking about this interaction, it made me think about the way I am in just about all instances (except when interacting with my son) — fast. This mom was certainly in “go-go-go” mode, as she was thinking about the appointments that her family needed to keep and then she brought that same attitude to the interaction.

My point in sharing this anecdote today is to remind you (and me!) to take the time to sloooow dooooown — at least a little bit — to bring a bit more intention to our interactions and even our way of being.

I’ve written plenty about meditation, but I’m not even talking about that in this instance. Sure, meditation can certainly help one slow down, but what I’m talking about specifically is taking some time to let the silence show you there’s music. If the “music” is always on, we don’t necessarily know that there is music (as we don’t know what it sounds like without music).

So go ahead, let the silence into your interactions and way of being.