In the Introduction, we broached the idea that the way other cultures parent might be more “right” than the way that the culture in North America parents, as discussed in the book Parenting Without Borders. In Part 1, we looked at some of the different cultural thoughts around sleep. There was also that stunning example of how it’s normal for babies in Scandinavia to be found taking a nap on the terrace in the dead of winter! In Part 2, we explored “stuff” and how having more of it might not be best for our children. In Part 3, we looked at how different cultures relate to food in the context of parenting. In Part 4, we looked at how saying “good job” to our little ones might not have the effect we think it does. In Part 5, we’ll look at hoverparenting and self-control.

I suspect that if you’ve read any of the previous posts in this series (and are a parent), you probably took issue with some of the things espoused and if by some miracle you didn’t, I’d be very surprised if at the end of today’s post, you haven’t taken issue with something.

Hoverparenting is everywhere. Heck, you don’t need to take it from me — there was a whole book on the subject written a couple of years ago: “The Overparenting Epidemic: Why Helicopter Parenting Is Bad for Your Kids . . . and Dangerous for You, Too!” I’m not going to get into any of the details in that book (truth be told, I haven’t read it), but I suspect that the idea of hoverparenting isn’t foreign to you and you’ve probably heard, to some degree, how it isn’t good. Here’s Gross-Loh:

If we take over tasks our children could be doing, even if they are kind of stressful or a challenge, when we are over-involved and do not allow a child his own autonomy, we can make a child anxious by giving him the message that he isn’t capable of doing things himself. We orient our children to ourselves, instead of to their own growth and accomplishments.

That last sentence is key — we orient children to us, rather than themselves.

I’ve mentioned before how great it is that this book sheds light on other culture’s perspectives on a given topic, but this one is particularly interesting. For instance, did you know that in Japan, it’s normal for kids to hit each other? Well, I might be stretching the usage of the word normal, but:

In Japenese yochiens, skirmishes between children weren’t nipped in the bud by adults; rather, kindergarten was regarded as a time — the time — in life for kids to experiment socially in a fully engaged, unhindered way; not only to play but also to fight and to cry.

Teachers didn’t see aggression as a sign of aberrant behavior or the mark of a “problem child” who would grow into a violent adult, but something normal that arose in childhood and would naturally fade when it had been allowed to run its course.

Whoa. Can you imagine the vitriol that would be directed at you, as a parent, if you took your kid to the playground and allowed your kid to hit the other kids?

Don’t get me wrong, I think there’s so much merit to this idea. Of course it makes sense that kids are still trying to learn about how to relate to the natural world around them and if they don’t have the language to express themselves, physical aggression (rather than verbal aggression) might be a strategy that is put into place.

Circling back to the “Japanese way,” it seems that there’s more to it than simply a parenting strategy of letting the aggression run its course. There’s the idea that kids are still tied to the spiritual world and are too young for discipline. Parents don’t want to push their way into their children’s experiences of joy, either.

You might be wondering about how Japanese kids turn out to be when parented in this manner. Well:

One study compared American and Japanese 4th and 5th graders and their thoughts on hitting, fighting, talking badly about someone, or spreading rumors. 92% of the American children talked about not wanting to get caught, or not wanting to get in trouble with a teacher or parent. 90% of Japanese children, on the other hand, did not talk about the punishment or getting in trouble. They said they shouldn’t misbehave because it would hurt a friend’s feelings, it would be wrong, it would hurt they group.

Whoa. I gotta be honest — when I first read through this chapter, I had to check myself a number of times because of how unexpected some of the results were. So, as parents, what can we do? How can we help our little ones turn out like the Japanese 4th and 5th graders?

The most important principle was that teachers should be constantly attentive and aware of what’s going on, but hold themselves back from getting involved too soon. If they see trouble brewing — two kids who were starting to fight with each other — they try not to react immediately. You had to give them that moment and sit on your own discomfort or desire to rescue the child from the situation.

Being too involved deprives the kids of experiencing the good feelings that come only from mastering the situation on their own.

And that’s it, in a nutshell, isn’t it? If we think about the juxtaposition of the two culture’s parenting styles, the hoverparenting found in America doesn’t allow kids the chance to master new situations. Parents are always there trying to direct the learning or direct the play. On the flip side, in Japan, there’s space given to the kids, so that they can figure out how to interact and relate to the world around them.

Another great example of this — how many times do you hear parents say, “Be careful,” or “slow down.” Sure, parents have their kids’ safety at heart, but how can they learn the consequences of their actions, if they never experience the consequences of not being careful or not slowing down (I’m not advocating we let our little ones run into traffic, here). Whenever I hear parents utter these words, I cringe (I also cringe when I hear “Good job“). How does telling a little person, “be careful” help them, unless you’ve 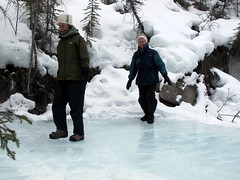 had a conversation around the inherent ambiguity of the word “careful.”

A short personal example: this past winter, as the snow began to melt, it rained and a layer of ice formed on the snow at a nearby park. When my son and I went to the park, I knew that there was a 100% chance that he was going to slip and fall on the ice. Instead of me telling him to “be careful” as he strode out onto the ice, I watched and let him slip — a number of times. After letting this happen a little bit, I walked over to him and talked to him about what it was like to walk on the snow versus what it was like to walk on the ice. We talked about having to walk more deliberately on the ice because of the lack of friction between our boots and the ice (yes, I talked about friction!). And wouldn’t you know it, after a few times of doing this, there was a noticeable difference in the way that he walked on the ice versus the snow.