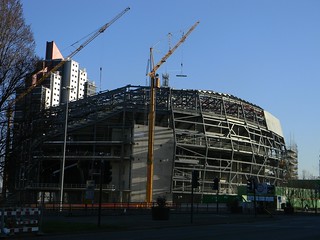 Unless you’re familiar with the literature in this arena (no pun intended) or you know about Betteridge’s law of headlines, the title of this post is actually still an unresolved question for you. Well, I won’t delay the inevitable: according to research published earlier this year, the answer is no — new stadiums do no lead to an increase in business.

There are two things I want to talk about as it relates to this research. The first is Richard Florida. If this area is an interest of yours, there’s a good chance that you’ve come across him. Florida has been a professor for the last 20+ years and has written extensively on cities. Here’s a post I found from him within the last year that talks about the very thing that the journal article discussed:

The overwhelming conclusion of decades of economic research on the subject is that using public funds to subsidize wealthy sports franchises makes zero economic sense and is a giant waste of taxpayer money. A wide array of studies have shown that professional teams add virtually no income to local economies. In fact, some of them find that large subsidies actually have a negative effect, taking money out of the local economy. Aside from the jobs generated by actually building the stadium, most jobs inside the stadium—selling food and beer or working at team concessions—are low-paying temp jobs. It’s even worse for football stadiums, which are used for games at most a dozen times a year, and maybe a few more times for concerts or large events. Public economic development dollars can be put to much better use on things besides subsidizing sports teams and their wealthy owners.

Ultimately, the burden of public subsides falls disproportionately on small cities that are the least able to bear the cost. For example, a $200 million public subsidy for a new stadium ends up costing a small city like Santa Clara roughly $1,650 per resident, compared to just $50 a person for L.A. And, of course, teams in bigger cities, with their bigger markets and more revenue, often do not need subsidies at all.

The reason I raise Florida’s name is because I was surprised that I didn’t see his name mentioned in the journal article. To be fair, I don’t think that Florida has done any primary research in this domain, but I would have thought that even in the opening introduction or literature review that there may have been some reference to Florida’s constant discussion of literature like this.

Anyhow, the second thing I wanted to talk about is something that might not be measurable. Well, it might not be measurable in a simple way. As a former amateur athlete, I have a special place in my heart for sports. Certainly, there are plenty of things that one could classify as “wrong” about sports, but part of me still wants to defend it/them and I’ll be upfront: that might be part of what’s going on with this section of this post.

Something I didn’t see in the article (and probably something I wouldn’t expect to find in any well-written article) is a measure of (or discussion of?) the positive externalities that result from a city’s team winning the championship or even the spillover effects from the possible positive externalities. Now that’s a tortured sentence. I’m talking about how the residents of a city feel after their team wins the championship (in a given sport). Naturally, not everyone would be watching (or care), but for those that are fans of the team that wins, there would certainly be elevated levels of joy and happiness immediately following the victory. If there were studies done on this, I suspect that there might be comparisons to those who have won the lottery in that a couple of months after, lottery winners return to a similar level of satisfaction/happiness that they had prior to the lottery win.

I wonder, though, could we measure the economic gains for a city from this positive externality and the resulting spillover effect (in this case, let’s say the spillover effect would be the “pay it forward”-ness of joy from the fans of the team to the non-fans that the fans will be interacting with in the weeks following the city’s team’s victory). Even if there is a tangible effect that can be measured, I’m sure that any reasonable cost-benefit analysis would still conclude that a new stadium isn’t worth it for a city.