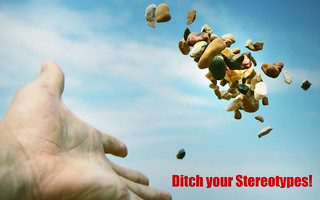 Pop quiz: hands up — how many of you think positive stereotypes are OK?

I suspect that for many of you, your first reaction may have been, “well, yeah, they’re positive, right?” I can totally empathize with that shortcut, but consider this excellent quote from Gordon Allport, one of the “founders” of personality psychology: “People may be prejudiced in favor of others; they may think well of them without sufficient warrant,” [quote excerpted from journal article cited below].

Last year, researchers sought to summarize some of the research about positive stereotypes. There were a number of interesting findings. For instance:

Among [a] sample of Asian American students, the majority (52%) had negative reactions (e.g., feeling marginalized) to their group being considered the “model minority” compared with 26% who had positive reactions. […] Although the subjective favorability of positive stereotypes may facilitate their expression among perceivers who intend them as “compliments,” the targets of such stereotypes can feel depersonalized as if they are being acknowledged exclusively through their category membership. [Emphasis mine]

So, while it might be a ‘positive’ stereotype that Asian Americans are considered the “model minority,” it’s possible that an Asian American may feel as if they are being depersonalized when having the stereotype directed at them. That is, they may no longer feel like they’re a person, but rather that they simply belong to this category called “Asian American.”

Let’s back up for a moment.

When I talk about stereotypes in my lectures to students, one of the first things I do is explain the mechanics of a stereotype. Our brain is processing way more stimuli than we could possibly fathom. For instance, in your office right now, do you hear the hum of the lights or the sound of the fan? If you’re on the bus or in a car, do you notice the sound of the brakes? How about at home… do you still hear the creaky sounds of the floorboards or the plethora of sounds that come out of the basement/vents? I suspect the answer to many of these questions for most of you will be no and that’s because you have habituated to them. Your brain has recognized them as non-threatening and moved on to focus on other stimuli — people.

There are so many people on the planet. Really, we could say that there are over 7 billion different kinds of people, but that’s impossible for a brain that’s trying to process as much as it can. So, when you meet people, your brain is busy trying to recognize patterns that it can map onto previous people you’ve met. When everyone’s brain does this, it follows that a thing called “stereotype” emerges. That is, a stereotype is our brain’s way of trying to find a shortcut for understanding the different kinds of people we interact with during our lives.

So, in the example above about Asian Americans, somewhere along the way, someone’s brain decided Asian Americans represented what they believed was a ‘model citizen.’ Forgetting for a second whether this is valid, it’s likely that there were other people’s brains came to this conclusion and so the stereotype is perpetuated.

Just because our brain is doing this in the “background” doesn’t make it ok. As humans, there are so many biases that we have to be aware of when making decisions — our brain taking shortcuts with stereotypes is just one of them. So, what can you do?

Well, as I often say when it comes to biases — the first step is awareness. You’ve gotta recognize that you’re falling prey to stereotyping and once you recognize that you’re doing it, I urge you not to be so hard on yourself. Let’s be clear — I’m not giving you a “pass” for stereotyping, no. But the culture from which you derive can have a lasting effect on your beliefs about people (which inform whether you employ stereotypes).

One quick and easy way to awareness — if you’re ready for it — is Harvard’s Project Implicit Test. I did a quick search and I was surprised that I’ve only mentioned this one other time in the last few years on this site and it was only in passing. From their site:

Psychologists understand that people may not say what’s on their minds either because they are unwilling or because they are unable to do so. For example, if asked “How much do you smoke?” a smoker who smokes 4 packs a day may purposely report smoking only 2 packs a day because they are embarrassed to admit the correct number. Or, the smoker may simply not answer the question, regarding it as a private matter. These are examples of being unwilling to report a known answer. But it is also possible that a smoker who smokes 4 packs a day may report smoking only 2 packs because they honestly believe they only smoke about 2 packs a day. Unknowingly giving an incorrect answer is sometimes called self-deception; this illustrates being unable to give the desired answer.

If you’re ready for the results, I strongly suggest you take the test.