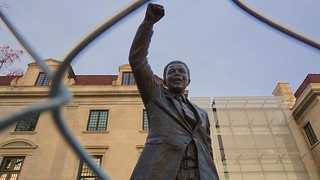 I was catching up on some of the journal articles I’ve accumulated to read over the last year and I one caught my eye: “Transformational and transactional presidents,” by Joseph Nye, Jr. In the article, Nye makes the case that presidents didn’t matter (as much) to the US developing into a great power as we may have previously thought. Furthermore, Nye makes the case that our definitions of the two types of leadership aren’t clear and that the preference for transformational leaders is misplaced.

Upon finishing the article, I was left wondering if (when?) the United States will again have a transformational president, with regard to domestic policy. Nye didn’t make this case in the article (but maybe he did in his book?), but based on his definition of transformational leaders, with regard to objectives [seeking major change], President Obama was certainly a transformational president. Obamacare is a sweeping change to the way that the US administers healthcare to its people. At the time, President Obama also enjoyed majorities in both the Senate and the House, so this kind of change was more possible (especially more possible than it is now. Can you imagine Pres. Obama trying to pass anything close to Obamacare with the GOP-controlled House and Senate?)

Given Hillary Clinton’s speech this past weekend, I’m inclined to think that she has ideas about domestic policy that would make her a transformational president. However, based on what’s been written about the likelihood of the GOP to continue to hold the majority in the House (redistricting, etc.), it doesn’t seem like there’s likely to be a Democratic-controlled House for the next few election cycles. It’s possible that the Senate flips back to the Democrats in 2016, but they’d need the House to also make a “big change.” So, it seems that, if there’s going to be a transformational president (on domestic policy), it’d have to come from the GOP.

I haven’t been following too closely the candidates from the GOP side, especially with regard to their domestic policy ideas, but is there a transformational president amongst them? There could be, but I suppose we’ll have to wait and see. If neither party is able to sweep the polls in 2016, we might be waiting for a transformational president on domestic policy in the US until at least the next decade.