It’s been almost five months since I wrote a post in this series. In fact, I looked back at the first three posts in this series and noticed that there was a rather large lag between some of the posts (Intro to Part 1 = 3+ months; Part 1 to Part 2 = ~1 month; Part 2 to Part 3 = ~5 months). I wonder if we can consider this some kind of metaphor for how it can be with parents who try to cross some things off their to do list. Anyway, my hope is that I’ll be able to post a few more parts of this series in the next month and a bit. Let’s have a quick refresher on the first three parts.

In the Introduction, we broached the idea that the way other cultures parent might be more “right” than the way that the culture in North America parents, as discussed in the book Parenting Without Borders. In Part 1, we looked at some of the different cultural thoughts around sleep. There was also that stunning example of how it’s normal for babies in Scandinavia to be found taking a nap on the terrace in the dead of winter! In Part 2, we explored “stuff” and how having more of it might not be best for our children. In Chapter 3, we’ll take a closer look at the different ways that children around the world eat.

One of the first things that struck me about this chapter was the aspect of neuromarketing. I’ve written about this in the past. From the book:

Food manufacturers spend enormous amounts of money to market their product to even the youngest eaters. The labels are brightly colored and appealing, and the foods are advertised directly to children on TV and the Internet. Supermarkets often put these kid-friendly foods at a child’s eye level so a child will be more likely to take them off the shelves and put them in the grocery cart when a parent’s back is turned.

Somehow, this seems… wrong. I totally understand the idea of free choice, free markets, and all that it encompasses, but is it really in our collective best interest to be pumping our kids full of sugar? More importantly, is it really in our collective best interest to allow an industry to surreptitiously convince our children that the foods they should be eating are found in the dry good aisle, rather than the produce section? Again, I totally understand that some folks are adamant about letting the ‘market’ correct failures, but it seems to me that in certain areas (healthcare being another one), there should be a bit more regulatory oversight.

On that note, I a little while back, I had what I thought was an interesting idea that incorporate some of the principles of Nudge:

The idea: a marketing campaign in which we tell people that, when they get unhealthy, their spouse or their kids will have to pay for it.

Circling back to the chapter, here’s another bit that I found startling:

It’s not just what kids eat, but how much. In the past thirty years, portion sizes have grown astronomically: a cookie today is 700 percent bigger than it was in the 1970s.

Seven hundred percent! That’s incredible. And that reminds me of one of the anecdotes I talked about when I wrote about how I stopped eating dessert:

There’s a story that I remember being told about Kate Hudson. I tried to find it just now, but Hudson recently mentioned something about a story in France that has similar keywords to the search I ran and so I’m not able to find it. It may or may not be true, but let’s just say that it is. When Hudson was young, her mother (Goldie Hawn), taught her an important lesson when it came to dessert: only take one bite. That is, when you’re served a piece of pie or a piece of cake, it’s not necessary to eat the entire piece. Instead, just take one bite of the dessert to “enjoy” the taste of the dessert and let that be it.

Can you imagine a sugar-starved kid only having one bite of their cake and leaving the rest? The stereotypical child that I’m imagining — of course — couldn’t do that, but I wonder if we move back to smaller portions (and smaller plates!) and teach our little ones about the importance of moderation, might this venture be a bit easier?

Before we close out this post, I wanted to share a couple of bits from the chapter about how food socialization of children in other parts of the world. In Japan, for instance, food is part of the education system. In the earlier grades, kids are learning about all the different uses for soybeans and by the time their in middle school, they’re 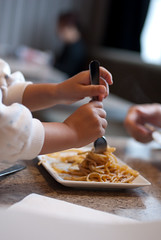 already learning the basics of how to cook. I think most folks know that the school calendar is different in Japan (longer school days and longer school year), which allows for time for other learning. Rather than strictly focusing on academic instruction, Japanese students receive an education fit for the ‘whole’ of the person.

You might also find Sweden’s way of doing things refreshing — kids get to pick what they want to eat. The small catch is, the fridge is stocked with only healthy/good choices. In this way, a child in Sweden will never make the ‘wrong’ choice.

Eating in South Korea is similar to eating in Japan. One of the things I didn’t mention about Japan, but that is very important in South Korea, is that the family eats together. Everyone is eating the same things and there’s a real emphasis on a shared eating experience.

Moving west to France and Italy — food is meant to be enjoyed. A quick example from France:

School lunch in France is a class in itself. Children get one and a half to two hours to eat a leisurely, three-course lunch, followed by a recess. A typical menu for preschoolers in Versailles has children eating sliced radish and corn salad with vinaigrette dressing and black olive garnish, roasted guinea fowl, sautéed Provençal vegetables, and wheat berries, Saint-Paulin cheese, vanilla flan, and wafers.