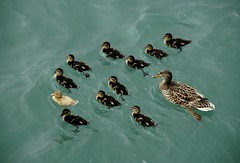 Are you a part of a group at work, school, or recreationally? Well, then you’ve probably discriminated without even knowing it. A recent theoretical review of the literature concluded “ingroup favouritism is more potent than outgroup hostility” when it comes to discrimination in the United States. Meaning, preferential treatment to the people that are on your team contributes to discrimination more than outward displays of hostility to people not part of your team.

I should say that this ingroup favouritism doesn’t simply apply to overt teams/groups. Consider your work relationships for a moment. Let’s say that your son or daughter gets along quite well with the son or daughter of one of your subordinates. This particular subordinate missed a bunch of days of work this year because they were taking care of their child who was sick. When it comes time for performance reviews and this particular subordinate’s performance falls between two possible ratings, you give the subordinate a higher rating. However, there is another subordinate, without a child who’s friends with your child. This subordinate has also missed some work this year, but instead of giving them the higher rating, you give them the lower (of the two) ratings. By giving a higher rating to the subordinate to whom there is a connection, you’d be exhibiting ingroup favouritism. You’re not openly discriminating against the other subordinate, but you are showing preferential treatment (even if it’s inadvertently!) to one subordinate over the other.

This particular bit of research seemed especially important given Ta-Nehisi Coates’ recent essay in The Atlantic. As I grew up in a fairly multicultural environment, I like to think that I don’t let a person’s race or ethnicity factor into any decisions I make. However, I, as many others have learned from Harvard’s Project Implicit Test, the culture that I live in has had an important influence on me.

There are obvious streams for this kind of research, but I was thinking about it in a broader context. As it stands, there’s the idea of ingroup and outgroup. That is, “our people” are over here and I’m going to do everything I can for them, while you’re people are over there and I’m not going to necessarily do everything that I can to help them. What if there no longer was an ingroup and an outgroup? Or maybe more specifically, what if everyone was part of your ingroup?

Let’s simplify this example just a little bit. Americans — is an ingroup — when you put it in context of a global stage. Americans look at themselves as an ingroup when it comes to some sort of international competition. That is, at the upcoming World Cup in June, Americans will be an ingroup, especially when there are matches against other countries. What if, instead of Americans thinking of themselves as the ingroup, they, instead, thought of the ingroup as fans of soccer (or football, depending upon where you’re from — although most Americans probably say soccer). While this is still an ‘ingroup,’ it’s certainly a broader and bigger ingroup than simply American (fans of soccer).

While not perfect, this is also on the way to expanding the ingroup to all of humanity.

Greenwald AG, & Pettigrew TF (2014). With Malice Toward None and Charity for Some: Ingroup Favoritism Enables Discrimination. The American psychologist PMID: 24661244