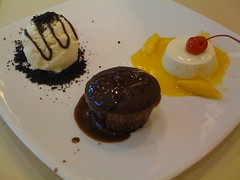 It’s been a couple of months since my last post, but with the academic semester waning, I should have a bit more time to get a few things written and posted here in the next month. Several weeks ago, I came across a post from a colleague, Tyler Cowen, who wrote about desserts. From Cowen:

Let me stress there are two different propositions:

I meant mainly the latter, although I do also find many desserts overrated.

In any case, the sugar and calories “shadow price” of most desserts is pretty high.  I’d rather consume my health sins in other ways, and so relative to their actual net prices I find few desserts are worth it.

The green pepper is a food which as a human I like a small amount but as an economist I like a great deal.

I read this post, as luck would have it, a few days before I got the flu. When I get sick, I usually eat ice cream. While I know that’s very counterintuitive and probably contraindicated, for me, so far in this life, eating ice cream has done the trick in making me feel better and nursing me back to health quickly. I suppose it also helps that I don’t often get sick and so the eating of ice cream when I’m sick doesn’t have much of an effect on my health (or at least I like to think that it doesn’t). So this time, upon falling ill, I decided I wasn’t going to eat ice cream and upon regaining my health, I kicked desserts altogether.

This was a big move for me as I’m known to have a sweet tooth for Ben & Jerry’s (coffee coffee buzz buzz buzz, in particular). On a side note, I wonder if this decision would have been harder if my favourite kind of ice cream were sold in Ottawa. The closest thing I can get to my favourite flavour of Ben & Jerry’s is Coffee  Toffee Bar Crunch. Anyway, so even though Cowen didn’t write a treatise on the matter, the simple yet eloquent argument about the negative effect that dessert has on a nation’s health and the effect that this can have in so many other areas, made me want to give up dessert.

It’s been over a month since I’ve given up dessert and while I’ve certainly thought about “cheating” and having something here or there, I’ve held strong to my conviction.

At this point, I should also add that I expanded my “no desserts” decision to sugar, in general. I’ve made a conscious decision to try and select foods that don’t have any (or very little!) sugar in them. For instance, did you know that some organic saltines (!) have sugar 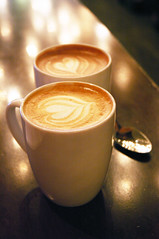 (evaporate cane juice, but still) in them? Or, some organic crackers, in general? A more obvious choice in cutting out sugar comes from trips to Starbucks. My drink of choice used to be vanilla lattes or caramel macchiato’s, but what do you think is in those flavour shots? Back to americano’s or cappuccino’s for me.

At some point, I do imagine that I will begin to eat “dessert” again, but there’s something that I’ll want to remember if/when I do decide to eat dessert again — just because I’m served a plate of dessert doesn’t mean I have to eat a plate of dessert.

There’s a story that I remember being told about Kate Hudson. I tried to find it just now, but Hudson recently mentioned something about a story in France that has similar keywords to the search I ran and so I’m not able to find it. It may or may not be true, but let’s just say that it is. When Hudson was young, her mother (Goldie Hawn), taught her an important lesson when it came to dessert: only take one bite. That is, when you’re served a piece of pie or a piece of cake, it’s not necessary to eat the entire piece. Instead, just take one bite of the dessert to “enjoy” the taste of the dessert and let that be it.

So, if/when I go back to eating dessert, my plan is to just take one bite and then push my plate forward.