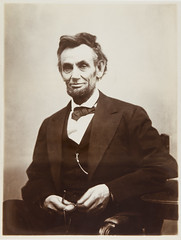 Do you recognize those words? Scholars (and/or) American history buffs just might. They were spoken by one Abraham Lincoln on December 3rd, 1861, as part of his first State of the Union address. The quote comes from very near to the end of the speech; the beginning of the third last paragraph. The sentence on its own is worth pondering, but let’s put it in context:

Now there is no such relation between capital and labor as assumed, nor is there any such thing as a free man being fixed for life in the condition of a hired laborer. Both these assumptions are false, and all inferences from them are groundless.

Labor is prior to and independent of capital. Capital is only the fruit of labor, and could never have existed if labor had not first existed. Labor is the superior of capital, and deserves much the higher consideration. Capital has its rights, which are as worthy of protection as any other rights. Nor is it denied that there is, and probably always will be, a relation between labor and capital producing mutual benefits. The error is in assuming that the whole labor of community exists within that relation. A few men own capital, and that few avoid labor themselves, and with their capital hire or buy another few to labor for them.

As is clear, Lincoln is referring to what was a major problem at the time — slavery. While those words were initially spoken with regard to slavery, I think that they have a broader application. That is, labor really is the superior of capital and not just in the context of slavery. Without labor, there’d be no capital. Labor is the backbone of any economy — local or global. As a result, it’s frustrating to see how poorly mismanaged the workforce can be.

From a business standpoint, I can understand why managers would want to crimp on labor, both in the number of employees and their However, I see this as extremely short-sighted. Whatever short-term gains are made from this strategy, they’re lost in the longer term when one has to replace the employee because they’ve either quit or because they’re overworked (and needed time off because of stress and/or fatigue).

I wonder if treating labor as if it’s another “expense” or “liability” is endemic to the culture of work in America. If we revisit the chart about vacation from this past summer, we see that just about every country on that list is in Europe and from what we know about the culture of many European countries, there’s an air of slowness that you just don’t find in America. Maybe it’s that European businesses have already learned this lesson of treating the workforce like an expense and realizing that it’s just easier to pay up front. How different would business look like in the US if the workweek went from 40 to 30 and the number of mandatory paid vacation days went from 0 to 20? Even if the US workweek went from 40 to 37.5 as is the case in Canada, how different would things be, then?

This focus on the short-term seems to be in more places than one. It’s even present in the way public companies are structured — they have to report their earnings every quarter. That is, every 90 days — 90! — a company gives a report to their shareholders (and the public) about their earnings. Predominantly, people are looking to see whether a company “beat” estimates. If (when?) a company doesn’t meet estimates, the stock price usually takes a tumble. But what if this incessant push to meet estimates and focus on these 90-day windows doesn’t allow for an appropriate longer term strategy? What if this 90-day crunch is preventing a company from pursuing a strategy that would make it far more sustainable in the long run and if they attempted to pursue that strategy, their stock price would plummet?

I don’t have all the answers to these questions, but I believe the beginning of the answer starts with labor. Companies that honor and respect their workforce tend to perform better.