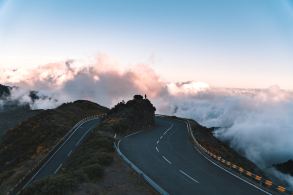 Now isn’t that a quote!? I heard this the other day listening to Alie Ward’s 100th episode of Ologies. In just about every episode, Alie will interview an expert about their “ologie.” Just to give you an idea, here’s a smattering of relatively recent ologies:

Maybe you don’t want fame. Maybe you’re happy living as a recluse. I don’t buy it. I don’t think that’s true. We all yearn for human contact and human connection. The “recluses” among us are those who’ve been hurt the most. They’ve been taught, through their upbringing or interactions, that it’s not safe to venture out. That when they venture out, they get hurt. And that makes me sad. It makes me sad that humans, because of their own pain and suffering, lash out and bring pain and suffering to other humans.

When you steel yourself and take that first step, is it going to be “up” the mountain? Is it going to be straight up the mountain? No, it won’t be. Because getting from here to there rarely ever happens in a straight line. Instead, you’ll start out on the path and get to a point where you realize, “Oh, I need to be going this way, now,” and then you’ll turn on your heel and up the switchback you’ll go. While it might seem like you’re backtracking, after a few minutes, as you gaze ‘down’ the mountain, you’ll see that you’ve ascended quite a bit by moving through these switchbacks. By moving through your life and venturing out. By moving through your life and putting yourself out there. By taking calculated (and sometimes not calculated) risks.

It’s the switchbacks that get you up the steepest mountains.