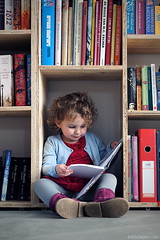 In my experience, the best way to retain the material you’re reading is to be giving a presentation on said material. That might sound a little odd, but consider it for a moment. If you have to present on a topic, when you’re reading about that topic, you (should be) reading just a little bit closer and maybe a little bit harder such that when you’re up in front of a crowd, you’ll be more inclined to remember what you read.

It turns out, this anecdotal experience has been studied:

A recent study in the journal Memory & Cognition showed the effect that reading with intention and purpose can have. Two groups were given the same material to read—one was told they’d have a test at the end, while the others were told they’d have to teach someone the material.

In the end, both groups were given the same test. Surprisingly, the group that was told they’d have to teach the material (rather than be tested on it) performed much better:

Having a clear question in mind or a topic you’re focusing on can make all the difference in helping you to remember and recall information.

Intuitively, this should make sense. When some folks read “for the test,” they’re not necessarily reading with the intention that they’re going to remember the information after the test. Put differently, they’re almost always not reading the material for an oral exam. This reminds me of something I wrote a few years ago:

Presumably, the students could get through the entire semester and finish with an “A” in the class without having to say anything. I realize that a great deal of communication in today’s world is completed online and through writing, but isn’t our ability to communicating orally important, too? At least, shouldn’t there at least be some time spent on it?

In that post, I was suggesting that there be a rebalance from written exams to oral exams — in part — because in my experience, there’s a deficit in the oratory skills of students in university. Even if we ignore the epidemic of fear of public speaking, most students don’t get nearly as much time practicing their oratory skills as they do their writing skills.

As luck (?) would have it, should there be this shift from written exams to oral exams, not only would the education system be strengthening people’s ability to communicate, but there would also be an effect in having people better remember some of the things that they’re learning.

To be honest, when I sat down to write this post, I had no idea that I was going to be strengthening my argument for having more oral exams in university and that’s — in part — one of the arguments from the article I initially referenced:

Association is a peg upon which you hang a new idea, fact, or figure. When you know where the peg is located, it’s a lot easier to find what you’ve hung upon it. As you read and come across new ideas and thoughts, you’ll want to connect and associate these with familiar memories as a means of creating a bond between old and new. There are many different ways to create associations in your mind, from pairing new thoughts with familiar objects, to creating acronyms.

So, next time you sit down to read your saved article on Pocket, catch up on a book on your Kindle, or read the Sunday Times, consider that the best way to retain some of the things you’re about to read might be if you were to pretend you were going to be giving a presentation on the material.