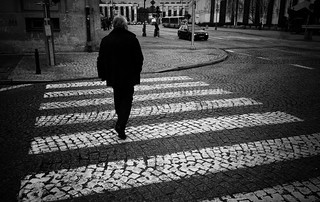 Chances are, when you leave the house or you leave the office, you take the same route home. All. The. Time. If you’re in a car, you may have to change your route because of construction or traffic, but it’s pretty much the same. If you’re walking (or walking to the bus/metro/subway/etc.), you’re probably looking to get there as quickly as you can, so you’ve learned which parking lots to cut across and which alleys are safe. That’s absolutely a great reason to continually take the same route — efficiency is useful when you’re in a hurry and who isn’t in a hurry these days? In fact, you’re probably so good at taking the same route that often times, you don’t even realize that you’ve passed 4 or 5 blocks. For those of you who drive, there’s the idea that you get in your car at home and all of a sudden, you find yourself at work, but you have no recollection of actually driving yourself to work.

I wonder… have you ever considered walking on the other side of the street?

If you need more reasons to convince you to try this tiny experiment then consider that it could help you solve that problem you’ve been working on for the last few days. There’s some research that suggests [can’t seem to locate it at the moment] putting yourself in new environments is a way to spark one’s creativity. By making these new connections in your environment, it could spark new connections for the things that have been ‘keeping you up at night.’