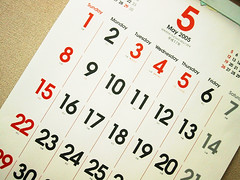 A few years ago, I wrote a post about the problems with saying “I’ll be ready in 5 minutes.” It turns out, there’s now research that — in a way — supports the point I was trying to make.

In this study, the researchers attempted to draw closer the connection between our present selves and our future selves. In particular, they looked at how manipulating the unit used to convey time (days, months, and years) can have an effect on that connection between our present selves and future selves. In plain language, consider the time between now and when you retire. It may be, what, 30, 20, 15, or 10 years away? For those of you closer to 25 years from retirement, that might sound like a long ways away (actually, it’s really not). Have you started saving for retirement? Oh, right, retirement savings, yeah, I’ll start next year.

That attitude right there, the attitude that our “future selves” are far away (when in actuality, they’re not), that’s what the researchers were targeting. From the researchers [Emphasis Added]:

We found that people say they will start saving four times sooner if told how many days rather than how many years they have until their child goes to college or until they want to retire. […] Considering one’s retirement or one’s child’s college education in days rather than years leads people to experience more connection between their present and future selves, which makes the identities linked to these future selves (e.g., “retiree”) feel more congruent with their current self. This reduces the extent that people discount future over current rewards. Less discounting means that saving for the future may feel less painful.

So, when we think about future events in a unit that is more relevant to us (days vs. years), we’re more likely to feel a connection to those future events and by extension, our future selves.

Let’s circle back to my post from a few years ago about 300 seconds:

To piggyback this research, I’d be interested to see results of a study that looked at our perception of time in an even smaller unit of measurement. For things like retirement and college savings, years to days makes sense, but what about for something that’s going to be happening in less than 5 years or something that will be happening in a few months?

Let’s say we’re hosting a conference in 3 months and we need to get things in order for it. Three months isn’t that far away, but thinking about it in months might not give us the necessary urgency. What if we thought about it in weeks? Twelve. Days? 90. Hours? 2160. Minutes? 129,600.

Ok, so minutes is probably too finite a measurement for this analogy, but I think you get the point. Changing the unit of measurement certainly has an effect on our perspective of future events.