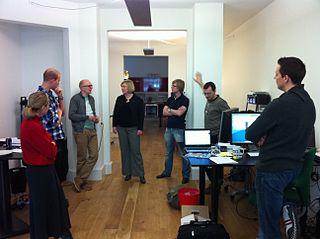 In keeping with the theme of “standing” being better for us from earlier this week, I thought I’d tackle another journal article discussing the merits of standing. This time, the research included participants well-beyond the 2nd and 3rd grade, but still used students — university students, that is.

Our findings suggest that, in addition to the physiological benefits of non-sedentary work designs, getting people out of their chairs at work may increase their capacity for collaborative knowledge work.

Of particular note in this field of research is the plethora of studies (or at least ideas) people have about how things can have an effect intrapersonally. That is, how to have an effect on an individual. There’s the idea of wall colour, nature, proximity to other workers, and on and on. But this study, as the researchers noted, seems to be the first that studied how standing can have an effect interpersonally.

Similar to the article from earlier this week, I’m interested in future or other applications for this research. One obvious application was noted by the researchers towards the end of the article: leaders of organizations usually have a choice over the setup of the office, so simply removing chairs in meeting rooms and opting for more of an open-space might be useful.

As I thought about this, I wondered about what it would be like for a Board of Directors to meet in a room without table and chairs. Would a Board of Directors scoff at the idea of not having a typical boardroom? I’m not sure. So then I thought, what if there were a bigger table in the middle, but the table wasn’t meant to be sat at and instead, it was meant to be stood at. If you can get past the odd grammar of the last sentence, consider the kinds of tables you might find at the “before” of any event. You know, if you go to a wedding or some sort of gala, they’ve got the “higher” tables where you can put your drink or maybe there’s food or what have you. What if there were a bigger table like that for Board Members (of people in the meeting) to congregate around? That might do the trick.

Thinking about Board Members getting together might be a bit off-track because they won’t be meeting daily as your group(s) probably will.

Nonetheless, the idea remains the same. In the “breakout” rooms in your office, maybe instead of having the prototypical table and chairs, it’s just an open room with… a whiteboard?