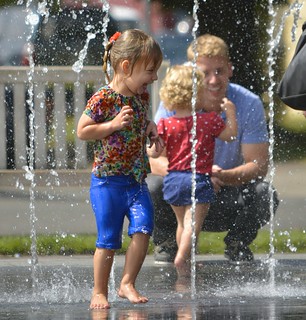 Part of these thoughts stem from watching other little ones interact with their toys. They can be quite possessive about what’s theirs and what they’ll allow different people to touch and/or play with. So, I was thinking, what if, from a very early age, we instilled within our young ones a sense that these things that they’re playing with aren’t theirs. Instead, we helped them understand that they were simply using these things.

There are certainly implications for them when they’re young, assuming that this is something that we could teach them. For instance, let’s say that they lose a toy. Instead of having a “melt down” over losing this toy, they just realize that they toy is gone. Since it wasn’t theirs to begin with, there’s no need to ‘mourn’ its loss. A similar thing could play out when our little ones are playing with other little ones. There’s often differing levels of development in play-groups, so some kids may physically take toys from other kids. This could lead to the proverbial “melt down,” but what if the kid who was about to “melt down,” didn’t, and it was because they learned that the toy was never meant to be theirs forever.

As I write this, I realize how difficult this may be to teach to someone at a very, very young age, but that shouldn’t be a reason not to try.

The first thing that comes to mind is the idea of renouncing materialism, which immediately made me think of Hinduism and Sannyasa. Of course, that’s a bit beyond what I had in mind when I was imagining our little ones learning about possessing objects. In fact, I was thinking more about Buddhism and Upādāna, which has to do with the idea of “grasping.” So, I wonder… if we were raised with the idea that objects aren’t meant to be owned/possessed, how different would our lives be? Maybe the whole idea of materialism fades away. Maybe we don’t spend much of our early adulthood (and for some, middle and late adulthood) acquiring things. Maybe we focus more time on enjoying ourselves and less time wishing we had a better car, house, or some other object that we deem desirable.