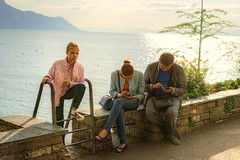 Over three years ago, I wrote a post about cell phone etiquette. At the time I wrote that, I wouldn’t have guessed that three years later, I’d be considering the possibility that smartphones could actually lead to better parents.

The stereotype goes that many parents will bring their children to the park (and/or some activity) and upon arriving, they shoo away their children only to peer down at their cell phone. Some folks do this while out to dinner with friends (even though they don’t have kids, see here). Many will cringe upon seeing parents sitting on the bench enwrapped in the goings on of their cell phone. Farhad Manjoo, however, points out how smartphones can actually make for more available parents [Emphasis Added]:

But we rarely consider how, by liberating us from the office, smartphones have greatly expanded the opportunity for certain kinds of workers to increase their involvement in their children’s lives. Because you can work from anywhere thanks to your phone, you can be present and at least partly attentive to your children in scenarios where, in the past, you’d have had to be totally absent. Even though my son had to yell for my attention once when I was fixed to my phone, if I didn’t have that phone, I would almost certainly not have been able to be with him that day — or at any one of numerous school events or extracurricular activities. I would have been in an office. And he would have been with a caretaker.

Stop and consider that for a moment: having a smartphone can actually make you more available as a parent. Now, this isn’t a commercial for smartphones, but it’s certainly something that should give you pause for consideration. I know it did for me when I read it. This idea put forth from Manjoo is exactly the kind of thing that I’m talking about when I say putting a new perspective on things. Someone who is so focused on how smartphones are bad for parents and how they keep parents from their children wouldn’t be able to see the possibility that for a small population, having a smartphone can actually allow a parent to be away from the office and with their children.

There still might be some of you out there that unequivocally think we shouldn’t be on our phones when we’re with our kids and that’s okay, but I hope that you’ll at least consider (reflect, think about, ponder, etc.) the possibility that the opposite may be true. It’ll put you one step closer to defending against the confirmation bias.