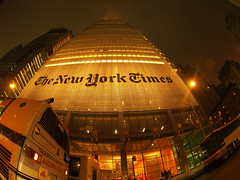 With the recent news regarding Jill Abramson and the New York Times, I wanted to take a closer look at the academic literature to see if I could find something about public salaries. There’s certainly been a lot written about whether she was fired or she quit or whether it had to do with secretive salaries or her gender. I’m not writing this post to debate any of that because I consider myself grossly uninformed on what may or may not have happened, but I am writing this post to talk about pay secrecy.

The research showed that pay secrecy adversely affected individual task performance. Meaning, the absence of public salaries led to a worse performance. Why? Pay for performance. That is, because the salaries weren’t public, workers didn’t have a perception that an increase in performance would lead to better pay.

There were a couple other important pieces that I wanted to highlight.

1. The best workers were more sensitive when it came to the perception of link between pay and performance.

This certainly makes sense as those folks who are working the ‘hardest’ would want to know that they’re being appropriately compensated for their hard work. An implication from this point is that organizations that don’t have public salaries might have a harder time retaining their top talent. We can tie this back to the situation between the New York Times and Abramson. Again, I wouldn’t say I’m informed of the situation, but from what I understand, Abramson was rather high up in the NYT hierarchy, which indicates to me that it was fair to consider her “top talent.”

It might be that a firm or organization isn’t yet comfortable with releasing all data about salaries, so an intermediary step could see them gently open up the salaries by talking about ranges. This point reminded me about government salaries that often have ranges for each level that an employee reaches. One may not know exactly what their co-worker makes, but if one knows that their co-worker has reached a certain level, one would know that one’s co-worker’s salary is in a certain range.

Just before ending this post, I wanted to circle back to the point about pay for performance. In this study, the task that participants completed was a “computer matching game.” Based on what’s been written about pay for performance, this is the right kind of task to test these sorts of hypotheses. However, when it comes to more creative tasks, the pay for performance model doesn’t always fit the best. Tying this back to the situation with Abramson and the NYT — it’s not clear to me whether the “pay for performance” model fits best. Having never worked at a newspaper or publishing outlet, I don’t exactly know the role of an Executive Editor, but from what I’ve been able to read through Google searches, it sounds more like creative tasks.