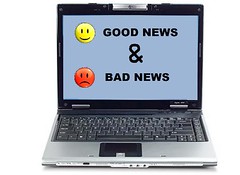 As it turns out, our answer to this question is different depending on whether we’re the one delivering the news or we’re the one receiving the news. If we’re delivering the news, we’re more likely to want to lead with the good news and if we’re receiving the news, we’re more likely to want to hear the bad news before the good news. Research published in last month’s Personality and Social Psychology Bulletin indicates that the order the news is delivered has implications for both the deliverer and the recipient.

The deliverer, wanting to avoid the ‘pain’ of delivering bad news and acting on egocentric biases, prefers to lead with the good news. The receiver, wanting to allay their anxiety about the bad news, much prefer to receive it before the good news. There’s certainly a disconnect here between the giver and the receiver. The giver, wanting to delay the painful experience of delivering bad news, prefers to save it for the end of the conversation. Conversely, the receiver would rather get the bad news out of the way from the outset.

The researchers found that if deliverers were to take the perspective of news-recipients, they’d be more inclined to lead with the bad news. While not specifically labelled as such, in testing this hypothesis, the researchers have found another positive to empathy. If the deliverers were to empathize with the the news-recipients, that is, pretend as if they were the ones receiving the news, they’d much rather hear the bad news first.

As it happens, hearing the bad news first might not be what’s best for the recipient.

If there is behaviour that needs to be changed, hearing the good news after the bad news might leave the recipient on their preferred high note, but also might diminish any motivation they might have had to act on the bad news. In Study 3:

News-recipients who received bad news first were less likely to take an easy opportunity to improve, choosing instead to engage in a boring and personally unproductive task (i.e., stapling papers for the researcher).

While deliverers of bad news might be acting out of their own self-interest when they prefer to deliver the good news first, they might actually be doing what’s in the best interest of the receiver. So, what order should you deliver the news? Well, that seems to depend on whether you want to motivate the receiver to act on the bad news.

One other implication of the good then bad sequence is that sometimes people like to tack on another piece of good news after the bad news to soften the impact. This is often referred to as a sandwich. While this may make the deliverer feel better, it tends to quash the motivational effect of ending with the bad news.