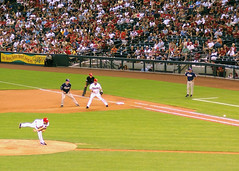 The baseball season is long — the regular season lasts more than half of the year. And that’s just the regular season. It doesn’t even include the preseason or postseason. As the season spans six months, one would think that it might be hard for some players to keep their focus during the middle of the summer.

In fact, this past Sunday while watching a Blue Jays game, I saw a graphic that depicted the wins/losses of the teams in the division during the last game of the series for the 2013 season. The graphic showed how the other teams were far more successful than the Blue Jays when it came to the last game in a series. As a result, it got me thinking about how to better incentivize players (maybe managers, too?)

Before I get into the details, I want to preempt the argument that baseball players get paid too much. Grant Brisbee of SB Nation had an all-around great response:

The problem with these comparisons is that baseball isn’t the real world. There is no comparison for baseball. Try to invent one without devolving into ridiculousness. Okay, so there are 30 Walmarts in America. And there are laws that protect Walmart’s monopoly, which means there aren’t any Targets. But those 30 Walmarts can be run only by people with Ph.D.’s who graduate in the top one percent of their class from the top 10 universities. And the Walmarts are in competition only with each other, which means …

… a ridiculous scenario all around, of course. Baseball players shouldn’t be compared to the average American worker. They’re specialized, elite talents in an entertainment industry that’s sitting on a money spigot. And I feel like I should mention this at least once: If the players didn’t get the money, it would just go to the owners. You can argue that owners should get a larger share because they take the investment risk. I’m not sure I’d agree, but that’s at least a consistent argument. Saying that players should make less because it offends your sensibilities isn’t quite as compelling.

Now that we’ve gotten that out of the way, we can focus on how to incentivize players to win series. Well, just before that, let me talk a little bit about why I chose series as a unit of measurement. As there are 162 games in a season, it seemed like incentivizing a player to win every game might superfluous, as players always want to win the game. I chose a series because there are a little more than 60 of them and it seemed like a good intermediate goal (or project milestone, if you want to put it in the language of project management) between winning every game and making it to the playoffs. 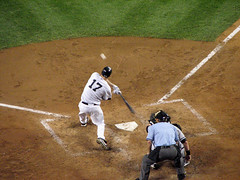 Most series are 3 games long, so we can think of winning the series as winning 2 out of the 3 games. If the team wins two out of the three games, then the players all get a bonus. To guard against them mailing it in during the last game, there could be another bonus if they sweep the series and win all 3 games. What happens when the team loses the first 2 games of the series — what do you incentivize then? Well, you’d incentivize not being swept. That is, if the team loses the first 2 games, the players get a bonus if they win the 3rd game and avoid being swept.

For those series that are 4 games long, the same incentivizes for winning/sweeping a series still apply, but we’d add another one — tying a series. That is, if a team is down 2 games to 1 in the series, the players would get a bonus if the won the last game to tie the series 2-2.

Let’s use last year’s MLB salary figures as a basis. Fangraphs had an article that detailed the average MLB salary last season ($3.4 million) and the median ($1.1 million). The median salary is probably a better representation, so let’s use it. The median salary equates to approximately $20,000/week, assuming that players get paid every week of the calendar year. Let’s also assume that there are 60 series in a season. That means, there will be approximately 60 times to offer players this bonus incentive. There are also 25 players that are on the active roster. As a result, we’d have to decide whether we wanted to reward all players or just the players that played in the game.

With 25 players on the active roster, the calculation for offering a bonus of $1000 makes it quite the expense, but not as much as you might think. 25 players getting a bonus of $1000 across 60 games equates to an extra 1.5 million that needs to be budgeted. Given that this is approximately the median salary of an MLB player, one would think that teams could afford this. It’s also important to note that these calculations didn’t include the possibility that teams would win the series and sweep the series.

In those cases, players could get a bonus for winning the second game of a three game series and then get another bonus if they win the third game of the three game series. A quick look at the total number of sweeps last year tells us that the average number of sweeps was 7. So, we can add another $175,000, which brings the total expense to $1.675 million. While certainly not a small amount of money, in the context of how much teams spend, it seems like it might be worth it to try and win a few extra games.

Put differently, if they would have employed this strategy and it was successful at least 50% of the time just in the series where they almost swept a team and were swept, they would have made the playoffs.