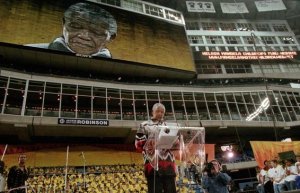 When I was in elementary school, I was fortunate enough to get the opportunity to see Nelson Mandela in person — at the Skydome. It was a very impactful experience for me and it’s one of my shiniest memories. It happened about 15 years ago when Mandela came to launch the Canadian Friends of the Nelson Mandela Children’s Fund. I was in a Kindergarten to Grade 8 elementary school and two students (one male and one female) from each grade were getting the opportunity to go to the event at the Skydome. I don’t quite recall how I got picked, but at the time, I remember thinking that it was pretty cool I was going to get part of the day off from school to go see Nelson Mandela.

Early I said it was one of my shiniest memories and it was an impactful experience. I don’t really remember many of the different events that happened that day, but a few things are quite clear in my mind. On a side note, it seems I wasn’t the only person who doesn’t remember everything from that day. One of the things that I remember clearly is the song or at least one of the songs. After some brief searching, I was able to find it on YouTube. You can hear it in the beginning of this video:

Those singers continuously repeating his name and then when he makes an appearance by way of a golf cart. I remember that. Also, when he made his entrance, I remember this roar overcoming the crowd. I remember that in our section, we were banging our feet on the stands to add to that excitement in the crowd. I’d been to baseball games at the Skydome before, but I didn’t remember ever hearing the crowd become so loud. That whole experience, I remembering being a bit awestruck. I was a bit young to really comprehend everything that was part of what happened to Mandela, but I suppose part of me knew it on a visceral level and that’s what made the event so impactful.

On the topic of crowd loudness, when we got back to school later that day, in the playground, I remember folks asking me if we felt the earthquake. Earthquake, I thought. They continued on by saying that there was an earthquake (!) while we were at the Skydome seeing Nelson Mandela. This, along with that song, are the two things that really stick out in mind about this event. I had thought that the crowd was just “that” loud to Nelson Mandela, but maybe part of our loudness was amplified by some sort of rumble in the Earth.