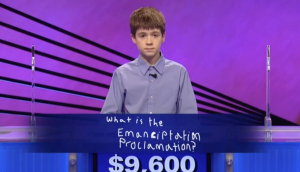 A couple of days ago I shared a link on Facebook to a video of a contestant (a young contestant) on Jeopardy!. The post sparked a bit of conversation, so I thought I’d give it a bit more attention. The long and short of it is that the contestant incorrectly spelled the Final Jeopardy! question. As a result of this misspelling, he was scored as having answered the question wrong, even though everyone in the building and watching at home knew that he “answered” the question correctly. It seems that because of the rules that the judges had previously set forth, they couldn’t give the kid the benefit of the doubt, even though the misspelling only included one extra ‘T’ in two words that totaled 23 letters.

Based on Alex Trebek‘s (the host) reaction to what the contestant had written down, I think that he thinks the kid should have gotten the benefit of the doubt. You can hear him stalling for time in the video as the judges make their decision. After Trebek relays the decision to the contestant (and the audience), he tries to offer a bit of reasoning for this decision. It sounds like the “closeness” of an answer is determined in advance of the show for which the questions will be used. Meaning, even though the ages of the contestants on the show are between 10 and 12, the severity with which the judges were scoring the questions could have been as if adults were playing. Is this fair? Is it fair to adjust the rules?

As I reflected on this and some of the reaction that it precipitated on Facebook, I wondered how folks would react if the scenario weren’t a game show. What if this scenario were in a school setting? If the student incorrectly misspells the word, they’ll likely get it wrong — on a spelling test. But what if the test has short answers? Do they then get points because the professor/teacher knew what they were talking about? Do they get full credit? Does the professor/teacher take off a fraction of a point?

I don’t have a definitive answer for any of these questions, but it’s certainly something to think about when we reflect on when we think it’s okay to bend the rules.