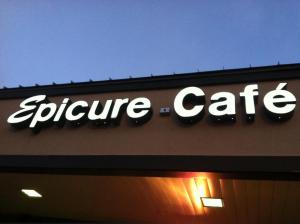 Tonight was a bit unexpected. One event (the apartment across the hall having its floors finished) led to a series of events that caused me to end up at a place I probably wouldn’t have foreseen going to, at the start of the day. Since the smell in my apartment was unbearable, after class, I ended up on a roundabout walk looking for a place to eat.

My original plan was just to grab something quick nearby and then head to the Starbucks to catch up on things. Well, that didn’t happen. After walking for about 2 miles, I ate dinner at a local Chili’s, but not before finding a rather artsy place. From the outside, the artsy place looked like it was more a café than it was a place to eat, so that’s why I walked to the Chili’s.

After scarfing down some Shrimp tacos, I headed back to the artsy place, where it also happened to be Open Mic night! (So much for catching up on things, right?) I had a fantastic time. Sure, my plan was to catch up on things, but sometimes, you have to roll with things and let life take you where you’ve got to be. Not only did I have a great time, I’ve found a local artsy place that I can walk to whenever I’m in the mood for that kind of vibe.

1. The place I went to Epicure Cafe. Fantastic place. I highly recommend it. It’s not the kind of place you’d expect to find in a strip mall, but you’ll be pleasantly surprised. They are highly rated on Yelp! and were feature in Northern Virginia Magazine!