In continuing to dig through some of the archives of papers I’ve written in the past, I thought I’d share a fun one I write while attending Sofia University. This paper was for a class in the Psychology of Spiritual Development. The prompt for the paper was for students to ‘construct our own synthetic model of spiritual development that integrated/incorporated two or more traditional or psychology models.’ I don’t remember where I got the idea to couch this in the context of frogs, but I remember that this made it more fun to write. Also, I remember the professor telling me that he really enjoyed reading the paper. I hope you do, too!

Biological development occurs across the lifespan from birth to death and it is arguable that spiritual development occurs across the lifespan, too. As we grow and age, we are forever embedded in a learning process. When we are babies, we learn mostly from our parents because they are constantly taking care of us. As we grow out of our baby stage, we begin to learn from other people in our environment, which could include siblings. We then move into early childhood and adolescence where we are not only learning from our parents, but we are learning from teachers, classmates, and any number of other people in our environment (bus drivers, strangers, cashiers, etc.) During these learning experiences, our body is also growing. Our body is in a constant state of change. When we are born from our mother’s womb, we are in one state of being – biologically speaking. This state we begin as babies is not even the same state that we are in the next day. There are multiple processes happening within our body that help us grow. Just as these processes are helping our body grow biologically, there are also spiritual processes that are taking place at the same time.

In M. Scott Peck’s, Stages of Spiritual Growth, Peck highlights that most children are in Stage one on his model. Peck has four different stages of growth and notes that most people progress from stage one to stage two (although not everyone does). Peck is not the only professional to posit that spiritual development occurs at certain ages. In James W. Fowler’s, Stages of Faith Development, Fowler highlights that Stage Zero occurs between birth and two years of age. Fowler has six stages of faith development (including stage zero), that people can progress through. Just as Peck noted with his stages of spiritual development, Fowler notes that not everyone can progress through the stages of faith development. Fowler’s stage six is reserved for those who have reached a state of being liken to that of Mahatma Gandhi or Mother Teresa. The case has been made for a similarity between biological development and spiritual development. In the next section, there will be a description of the biological development of a frog.

Biological Development of the Frog 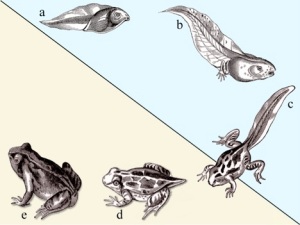 metamorphosis, there must be eggs. The majority of frogs start out as an egg. Most of the time, female frogs will lay eggs in the water, but sometimes, they will lay them on land. If these eggs are laid on land, they will be laid very close to the water. When the female frog lays eggs, they do not just lay one egg, but multiple eggs. These eggs are the subject of much predation and as a result, most frog eggs do not survive. However, those eggs that do survive from predators will hatch within one week.

Once the eggs hatch, they become tadpoles, which are sometimes referred to as polliwogs. Tadpoles have an oval body with long and vertically-flattened tails, much like the image of (a) in Figure 1. In this stage, the tadpole is completely submerged in water. There are no lungs, but there are external gills for respiration. The tadpoles do not have eyelids, nor do they have front and hind legs, but they do have tails that they use for swimming. These tadpoles typically eat algae. Tadpoles are very vulnerable to predation, just as the eggs. Something interesting to note is that their counterparts (fellow tadpoles) may eat tadpoles developing quicker than their counterparts do. That is, the late bloomers survive longer, which is not something that is common among other species, specifically humans. Tadpoles that develop early would grow hind legs faster as in (b) of Figure 1. Tadpoles can remain tadpoles for as long as one year depending on the time of year that they hatch. If they hatch into tadpoles near winter, they may stay as tadpoles through the winter.

Towards the end of the tadpole stage, frogs undergo a metamorphosis. There is a dramatic transformation in a frog’s physiology. These tadpoles develop hind legs and then front legs. The tadpoles will lose their external gills and develop lungs. The intestines shorten in length as they begin to shift from an herbivorous diet to a carnivorous. The position of their eyes shift to allow for improved binocular vision. This shift in their eye position is important and mirrors their shift from prey to predator. At this stage, the tadpole is no longer referred to as a tadpole, as this is inaccurate. However, it is referred to as a froglet. The image of this description can be found in (c) and (d) of Figure 1.

In the final stage of development to adult frog, the froglet undergoes a transformation known as apoptosis, which is the technical term for programmed cell death. The apoptosis for the froglet occurs in their tail. Instead of the tail falling off as in some other species, the froglet’s tail undergoes resorption, which is the technical term for the process of losing substance. This process can be seen by looking at Figure 1 from (c) to (d) to (e). In this section, there has been an explanation of how the frog undergoes biological development beginning with the egg. Then, there was a depiction of the process as a tadpole and as a froglet. Finally, there was a description of an adult frog. In the next section, there will be ties made between the stages of biological development and the stages of spiritual development.

Note: Check back tomorrow for the last two sections of the paper (spiritual development of the frog and the conclusion).